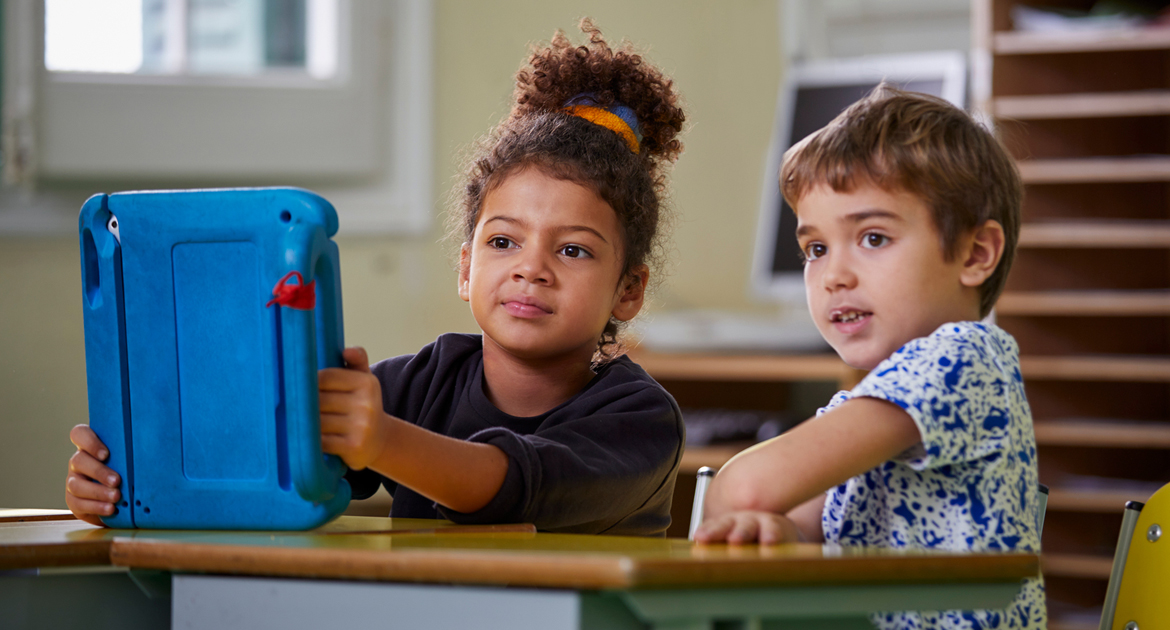 Setting:
It’s two weeks into the five-week “Community Workers” thematic unit, and through interactive read-alouds, chants and songs, and a real-life classroom visit from a firefighter, the children have been exposed to a lot of vocabulary about community workers’ roles,  uniforms, and locations—and how they support the needs of the community. In multiple ways, the teacher had reiterated the key message that people contribute to a community in many different ways, and that workers of many roles support life in the community. A dramatic play area engages children in dressing up and play-acting the various community worker roles, but by this point in the unit, Ms. Williams knows students need to have some structured opportunities to actively produce the language themselves. After all, one of the language arts objectives is for children to develop descriptive language—to be able to ask and answer questions, to describe things with detail, to speak audibly, and exchange information through conversation.

Ms. Williams knows students need to have some structured opportunities to actively produce the language themselves.

Lesson: Barrier Games to Build Oral Language
Today, Ms. Williams is bringing out the Barrier Games! She has paired her Multilingual Learners with partners who speak the same home language, so they can choose the language to use. Across a table, partners face each other with a cardboard barrier between them so they can see each other’s faces and talk but not see what is on the table in front of their partner. They each have identical sets consisting of a map of a community with a firehouse, grocery store, hospital, post office, and mailboxes—and streets connecting them. And, each also has a set of manipulatives including plastic figures of community workers dressed for work. After deciding who will go first, Alicia will need to place one of the figures on her map and describe what she has done without naming it directly. They know this game; they play some version of it in every thematic unit. The task is to describe. Bonnie can ask clarifying questions, but she then has to try to duplicate what Alicia did on her side of the barrier.

Alicia starts off slowly. “I put the community worker frente a la tienda.” Bonnie is puzzled. She sees the store on the map but can’t figure out which of the community worker figures to place. “What is he wearing?” she asks, and Alicia answers, “Zapatos marrones.” “Is he carrying a bag with mail?” Alicia says, “No,” and Bonnie presses further. “Does he have anything in his hands?” Alicia answers, “Groceries.” Confidently now, Bonnie puts the grocer figure in front of the store. This goes back and forth; describing, asking questions, answering questions using a mix of Spanish and English as their maps fill up with the figures. They giggle hysterically when Alicia puts the firefighter laying down underneath one corner of the map. “Tomando una siesta!” she says. When all of the figures are placed, the girls in chorus say, “1, 2, 3, REVEAL!” and lift the cardboard barrier to see that they achieved an exact match. Ms. Williams smiles and calls out, “Great describing going on there!” The fact that they relied on both languages to communicate is fine. What she witnessed was students actively practicing asking and answering questions, listening to each other, and using descriptive language. That’s what she was going for!