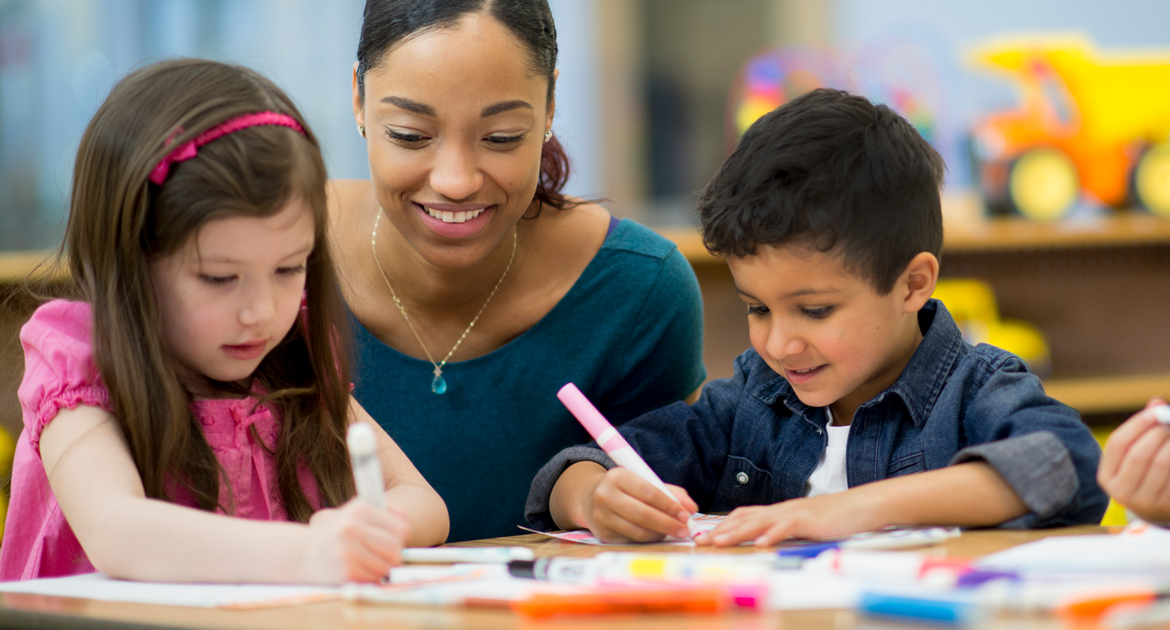 Kindergarten: English-instructed classroom with many Multilingual Learners, six of whom are at an "emerging level."

It used to be, a long time ago, to get from home to school,
You couldn’t ride a bus or train or drive in a carpool,
Perhaps a horse and buggy would be the way to go,
You’d likely walk, even a long, long way, although it might be slow.

It’s different now, in this modern day. For one, you might have a car,
We’ve got paved roads and freeways, and buses that travel far,
And new inventions that are oh so fun, like the skateboard and the scooter,
Or even perhaps a jet plane if you are a long-distance commuter.

In contrast to days long ago, things are different in these modern days,
The technology and transportation are more advanced in many ways,
But there’s at least one similarity, and that’s the basic rule,
You have to get out of bed in the morning, so you won’t be late to school!

The words to the song are posted on a big chart, and Ms. Bridgeman always tracks the words with her pointer as the children sing, although these Kindergartners are not really reading the words. Rather, through their singing and repeated oral practice, they have easily internalized the vocabulary, rhythm, and language structures. And, for the Multilingual Learners, gained practice in English pronunciation. As the children sing and add motions to the words they sing, they are building their foundational literacy skills, language, and content knowledge.

There are six Multilingual Learners of the “emerging level” of English proficiency in the class, and Ms. Bridgeman designs her Designated English Language Development (ELD) small group to prepare these children for what the whole class will be doing later—engaging in Shared Research projects about some aspect of life “then and now.” For now, she concentrates on creating a safe opportunity for her small group of Multilingual Learners to practice the “then and now” and “compare and contrast” language that they will use as they participate fully with their peers in the shared research. She will start with the chant because they already know the words.

As the children sing and add motions to the words they sing, they are building their foundational literacy skills, language, and content knowledge.

Lesson: Small Designated ELD Group to Prepare for Participation in Shared Research
The Designated ELD lesson begins with having the six children sing through the “Transportation: Then and Now/Compare and Contrast” song. The teacher points to the written words as they sing, and adds her own voice for every “it used to be,” “it’s different now,” “in contrast,” and “things are similar” to emphasize the target “compare and contrast” language. She writes on a chart the words: “different,” “in contrast,” “similar,” “days of old,” and “modern days,” and asks the group to see if they recognize any of those words in the printed text of the song. As they raise their hands, the teacher invites the child to come to the chart and highlight the word. “Yes, you found an ‘in contrast!’ Let’s all say it together!” This continues until all six students have found and highlighted a number of the “compare and contrast” words on the chart—getting oral practice in saying the words, and reinforcing the basic structure and vocabulary in the process.

Pulling out a set of photo cards showing children playing games from long ago and today, Ms. Bridgeman explains, “We have two piles of photos. One is of children playing long ago. The other pile is of children playing in modern day. Say it with me: ‘These are long ago! These are modern day!’”  Then she explains, “We are going to compare and contrast the long-ago photos with the modern-day photos. How are they the same? How are they different? Let’s begin by finding two photos that you think show similarities—things that are the same from the long ago and today photos. Then, we will talk about the differences.”

Modeling, the teacher pulls out a photo of a girl from long ago sitting side-saddle on a bicycle with a large front wheel and two small back wheels, and a modern-day girl with a helmet and wearing jeans riding a two-wheeler. Ms. Bridgeman says: “These are similar. Both show girls riding bicycles. Now, what are the differences?” Marina points to the helmet. “Yes, both girls are riding bicycles, but they differ in that the girl long ago was not wearing a helmet, whereas the modern-day girl is wearing a helmet.”

The children have a good time working in pairs matching photos, getting support from Ms. Bridgeman in learning the vocabulary of specific items in the photos, and then practicing their compare-contrast language structures. By the time the group is dismissed, Ms. Bridgeman is confident the Multilingual Learners have the language structures to be able to participate in Shared Research projects with their classmates, comparing life long ago to life today.