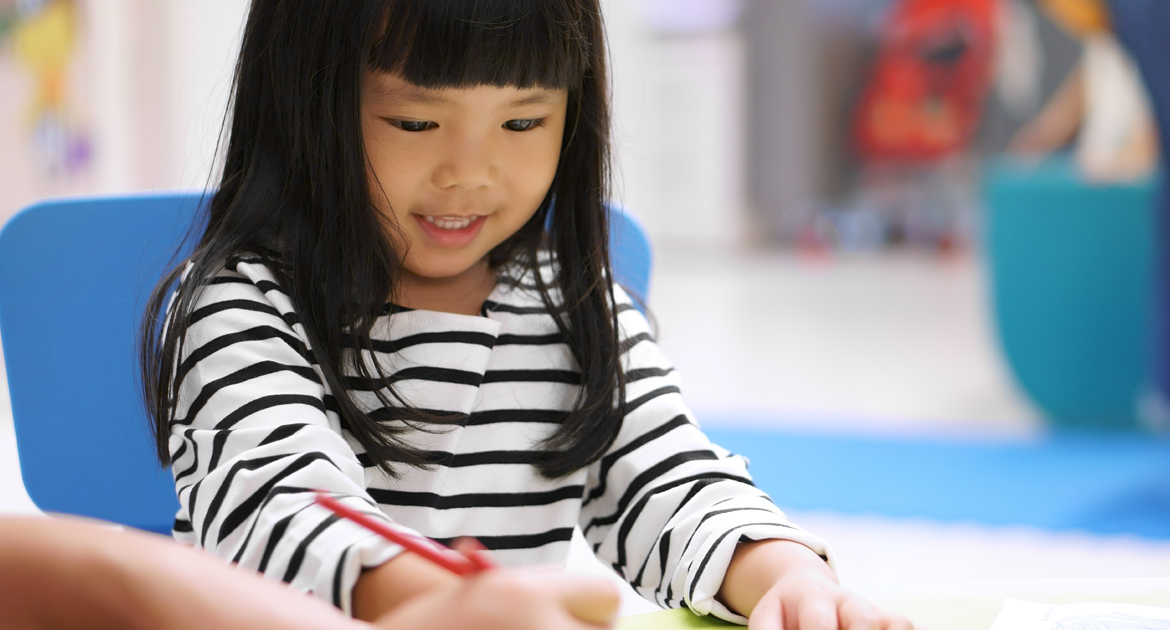 First Grade: English-instructed class with numerous Multilingual Learners who have a variety of home language and cultural backgrounds.

Setting:
Ms. Chester wanted to integrate the correct supports for her Multilingual Learners as she planned the new Light and Sound thematic unit based on the rigorous Next Generation Science Standards. After collaborating with her grade-level team, they decided that it would be critical to create an environment in which students could do a lot of direct exploration and develop skills of investigation and observation—both providing tangible and visual support for comprehension, and also providing a perfect real-life laboratory for developing the academic language of “compare & contrast.”

For the beginning of the unit, she would focus on light exploration, both natural and artificial, making observations of how we use them in our lives. Creating the environment was an important first step. She had fun assembling an Inventor’s Lab, boasting flashlights of different sizes, a variety of materials, such as plastic wrap, wax paper, and cardboard (to demonstrate transparency, translucency, and opacity), as well as color palettes and prisms (to explore what happens when light passes through color) and mirrors (to demonstrate reflection). Fabric from a blackout curtain became a “black box.” Shadow puppets and a small spotlight encourage playing with shadows. Three guiding questions were posted on the wall: “What are light waves? How can light be manipulated? How does light affect our daily lives?“

They decided that it would be critical to create an environment in which students could do a lot of direct exploration and develop skills of investigation and observation.

Lesson: Frontloading Vocabulary and Content at the Start of a Unit to Make it Comprehensible
The first-graders were thrilled when they entered their classroom room to see an Inventors Corner and many interesting objects to explore, but Ms. Chester called them immediately to the carpet with a big grin and brandishing her son’s lit-up Star Wars LightSaber: “Welcome Physicists! We are about to embark on studying LIGHT and how it impacts our lives.”

Launching right into the topic, Ms. Chester compared and contrasted the difference between natural light and artificial light—making efforts to make it comprehensible for her Multilingual Learners by opening the shade and pointing to the light outside when she spoke of “natural light,” and turning on and off the light switch in the classroom as she spoke of “artificial light.” She set the class to work with buddies, intentionally pairing children who speak the same home languages together, to generate lists of all the examples they could think of for natural light (the sun, stars, the moon) and examples of artificial light (lamps, flashlights, our phones when we turn them on, etc.).

Making the point that sources of light are all around, Ms. Chester read aloud Black Out by John Rocco, a beautifully illustrated book about the night the lights went out in the city, when the light of the stars, candles, and flashlights were all they had. She paused at key words her Multilingual Learners might not know (such as “shadows” and “dim”) to show some photographs and repeat the word. With a partner, students were prompted to share whether they had ever been in a blackout or about a time they had to do things in the dark. Ms. Chester noted with satisfaction that two of her Multilingual Learners felt free to speak in Spanish to each other, and she knelt by a relatively recently arrived Arabic-speaking student to provide support and scaffolding for his sharing.

When they were done, Ms. Chester announced, “Your first assignment as Physicists investigating light is to go home and take notice with your families of all of the ways light is important in your life, what the sources of that light are, and what you would do if you didn’t have those sources of light. You can work with your families to write or draw all the things you can think of and find. I’ve included the directions in the languages you speak at home!” As the children put their Home-School Connection instructions into their cubbies, she noticed the students looking longingly at the Inventor’s Lab. As they returned to the carpet, she told them, “Tomorrow, investigations begin at our new centers!”

After lunch, Ms. Chester planned to pull a small group of Multilingual Learners together in the Inventor’s Lab so she could practice some of the vocabulary and phrases related to the objects and activities. She wanted to do two things: 1) record any words with cognates (such as transparente/transparent, translúcido/translucent, etc.) on a nearby mini-easel, and (2) work together to label items of interest (flashlight, black fabric, etc.) in their home languages using a different color marker. This extra ten minutes of Designated English Language Development (ELD) time would ensure that these children would be able to participate with their peers the next day.