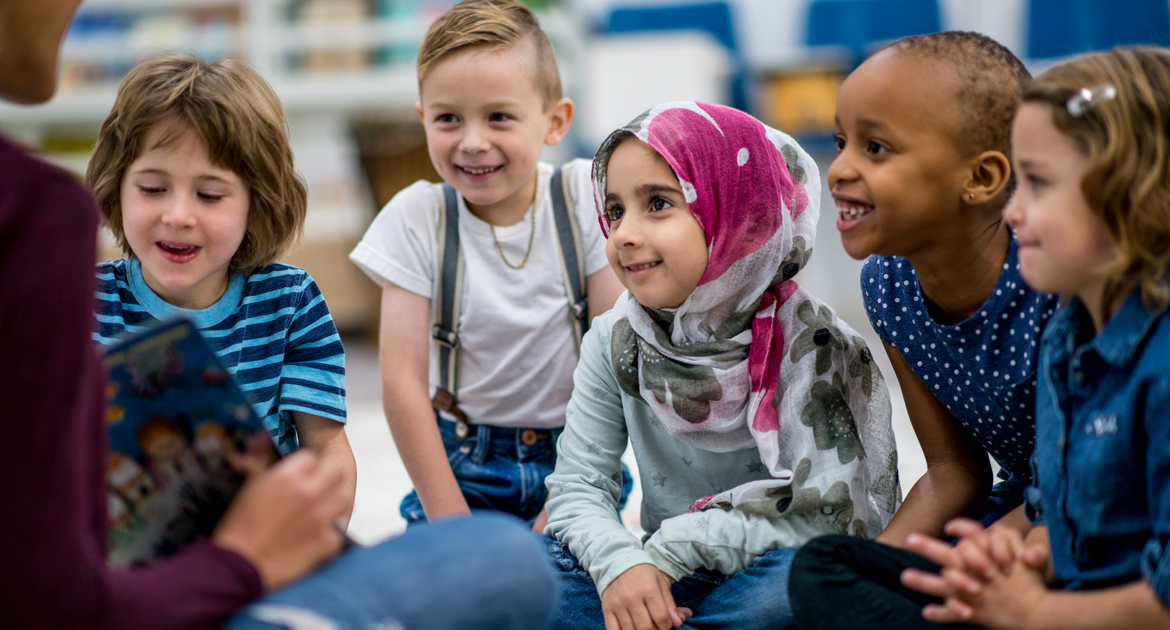 Setting:
The bulletin board outside of Señora (Sra.) Garcia’s room has each students’ photo on a superhero body surrounding the words “Ser bilingüe es mi super poder” (Being bilingual is my superpower). As families drop off their children they are invited to add to the dry erase board that asks: “How do you describe this kind of day in your home language?” Underneath is a photo of a rainy day. Families have responded with a variety of words in English and Spanish as well as in Mam and Mandarin. It is obvious that in this Kindergarten classroom children are not only engaged in becoming multilingual but that they are celebrating that fact as well.

As with all teachers, Sra. Garcia spent a great deal of time and thought into how to best set up her classroom for learning. In addition to creating spaces for the whole group, small group, and individual work, she wanted to make sure that her room represented the two languages being learned in an intentional and strategic way. With her students learning half the time in each language, it is important for her to make the languages visually separate in order to best support the students’ acquisition of both. Two of the walls in her classroom are covered in blue butcher paper, while the other two are covered in red. Hanging over one of the blue walls are the phonics cards she is using to teach Spanish, while an English set of sound spelling cards are hanging over one of the red walls.

With Sra. Garcia’s students learning half the time in each language, it is important for her to make the languages visually separate in order to best support the students’ acquisition of both.

Lesson: Color coding for language separation in developing early literacy, and preparing to contrast foundational skill of letter recognition across two languages
Sra. Garcia begins the day by welcoming students to join her on the carpet for their morning meeting. Posted on the wall is the schedule for the day in which she has used a blue marker to write in Spanish the upcoming activities for the first half of the day, and a red marker to describe in English what activities will happen after lunch. After students sing their morning song, they begin to share about their favorite kind of weather, as the class is beginning a unit about weather and seasons. Children are strongly encouraged to speak in Spanish, which is the target language for this time of day. However, as this is early in the start of the young children’s journey towards biliteracy, they are allowed to express themselves in any language, then supported by the teacher and other Spanish fluent students to learn how to express that idea or vocabulary in Spanish. Students are all engaged in choral response, as they learn and practice in Spanish the many kinds of weather that are shared.

The students then move into some Spanish literacy instruction, which begins with a read aloud about Pepe el pingüino. Students have spent time already learning the vowel sounds which are the foundation for Spanish reading and today they are using the book about Pepe to dive into the syllables pa, pe, pi, po, pu.

After singing the José-Luis Orozco song about “Cinco vocales,” they find some examples of words from the book, as well as from the song they sang that morning that begin with pa, pe, pi, po, pu. Students are then put in pairs and encouraged to look around the walls of the classroom and in the Spanish bookshelf for other examples. Sra. Garcia has two bookshelves in the classroom, one for English books and one for Spanish. She has worked to make sure that her book collection is not just linguistically diverse but also culturally diverse. These language detectives then come back to share the words they have found and the whole class is engaged in sorting them by their first syllable.