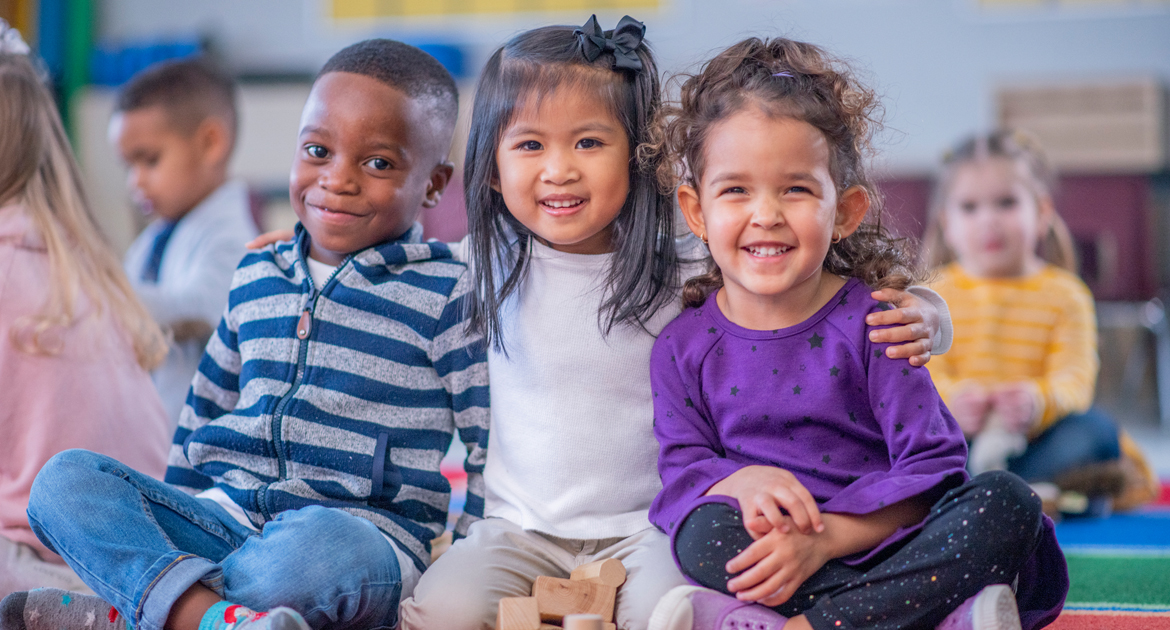 Kindergarten: English-instructed class with six Multilingual Learners, five of whom are Spanish-speaking, and one who speaks Tagalog.

Setting:
It’s Center Time in this Kindergarten classroom. Four children are playing in the firehouse dramatic play corner, six are clustered around blocks where a set of new cars has inspired children to build a road system, several students are painting, four are playing a math card game with the Instructional Assistant, and two are using cardboard and magazine cutouts to construct buildings for a cardboard “city.”

Suddenly, a loud scream emanates from the “city building” corner. Lilia is upset with Monica for smashing the cardboard apartment building that Lilia was creating. Monica has burst into tears. Ms. Rosen heads to the two children who are in distress, kneels to their level, and tries her best to calm them and help the two communicate. However, Lilia doesn’t have the language to express what she is feeling or why in English, nor does Monica (who only speaks English) have the language or capacity to understand Lilia’s angry words in Spanish. Ms. Rosen gives the children tape and suggests they work together to repair the rips in the smashed building, uniting the girls in fixing the situation. All the while, Ms. Rosen is thinking about the need to help the class build a shared vocabulary to talk about their feelings when they are frustrated or angry. It’s time to find a good read-aloud book dealing with feelings!

Ms. Rosen is thinking about the need to help the class build a shared vocabulary to talk about their feelings when they are frustrated or angry. It’s time to find a good read-aloud book dealing with feelings!

Lesson: Engaging Children in Developing the Language of Feelings
The next day at Circle Time, Ms. Rosen reads aloud When Sophie gets Angry, Really Really Angry by Molly Bang, pausing to have the children show with their bodies what it looks like when they are angry, engaging them in repeating key phrases in choral response, and having them reflect on what gets them angry. When the book is finished, Ms. Rosen posts a large chart paper with the heading “FEELINGS,” and explains, “We can all work on having words for and naming our feelings. What are some of the feelings Sophie had in the story?”

Marnie volunteers “angry” and Ms. Rosen replies, “Yes, Sophie was very, very angry,” as she writes “angry” on the chart. The teacher continues. “Here are other words that are very close to angry. Sometimes we are just a little bit angry,” (and she draws a picture of an unhappy face), “And you might say then, ‘I am annoyed!’” To make this comprehensible for her Multilingual Learners, Ms. Rosen makes a little grimace and shakes her shoulders to illustrate being a bit annoyed, then repeats the word and writes it next to the unhappy face. “Say that with me, class, ‘I’m annoyed.’”  She continues, “And sometimes we are really angry,” (drawing a picture of an angry face) “You might say, ‘I didn’t like that, I am MAD!’” (modulating her voice a little louder and shaking her fists a bit). Ms. Rosen draws an angry face and writes “MAD.”

“And sometimes we are SUPER angry like Sophie” (drawing a picture of a raging figure), “And then we might say, ‘I am FURIOUS!’ Say that with me: ‘I am really, really angry, I am furious!’”

Ms. Rosen asks the class if anyone knows how they might say “furious” in Spanish. Having looked up the word the night before, she knew it was a cognate. “Furioso? Now say it with me, like you are really, really angry!”  “Furioso!” They all call out. “Isn’t that wonderful,” Ms. Rosen points out, “Spanish and English are sister languages and many words sound almost alike – they are cognates! Furious and furioso – they both mean very, very angry! Let’s go home tonight and all of us ask our families, what words do they use to say they are just a little angry or annoyed? What words do they use to say they are very, very angry, like furious!” And reinforcing the message for her Multilingual Learners that their home languages are valued, she adds, “And we want words in all of the languages that your families can speak!”

Throughout the week, words are added to the chart and on Friday, Ms. Rosen points out to the class what they have done. “We have this big list already of feelings words just from reading one story. We have (repeat after me) ‘angry,’ ‘mad,’ ‘annoyed,’ ‘furious,’ and now all of the words your families have added! I will keep this list up here and we can add more feelings words each time we come across a new one.”

Periodically, the teacher had invited children to show with their faces and bodies the feelings now listed on the chart, photographed them, and put together a poster. The beautiful multilingual poster illustrated with the faces of the children in the class will adorn the classroom wall for the rest of the school year as the children continue to build the vocabulary to identify and talk about their feelings.