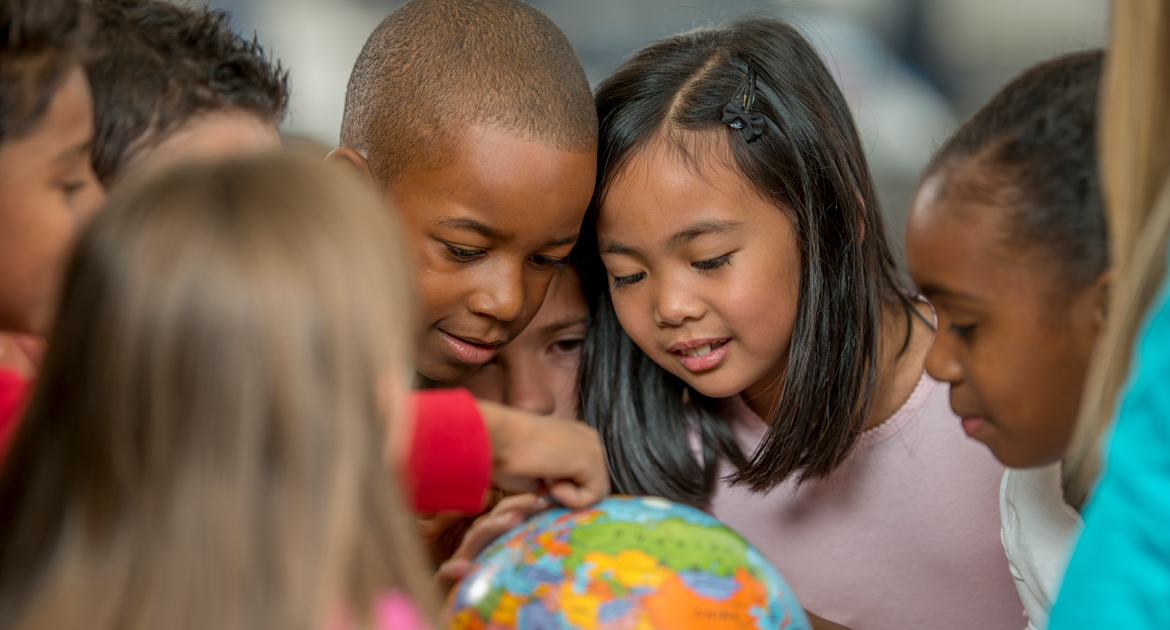 Second Grade: English-instructed classroom with half a class of Multilingual Learners who come from five different language backgrounds.

Setting:
Halfway through the school year, a new immigrant student enrolled in Ms. McNeil’s culturally and racially diverse second-grade class. Almost a third of the students are from Spanish-speaking homes, a pair of Israeli twins had enrolled a few months earlier, three Filipino students, and four African American students round out the roster. The newly-arrived student is Mahatma from India, and Ms. McNeil noted that he is designated as a Multilingual Learner with oral English skills that are somewhat strong—a “Bridging” level.

Lesson: Valuing Names and Identity
Anxious to give the new student, Mahatma, a warm welcome, Ms. McNeil assigned a classroom “buddy ambassador” to sit next to the new child and help him find his way around the school. Then Ms. McNeil introduced Mahatma to the whole class. “This is Mahatma! Let’s all give him a rousing welcome!” she says. Knowing how important it is to properly pronounce a child’s name, she turns to Mahatma and asks, “Did I get your name right?” To Ms. McNeil’s surprise, Mahatma replied, “My name is not Mahatma, my name is Mo.” The children simply followed Mo’s lead and called him Mo from that moment on, but Ms. McNeil pulled the boy aside later in the day and told him: “I saw that your name is Mahatma on the enrollment roster. I think Mahatma is a beautiful name.” But the child simply reiterated that his name was “Mo.” The teacher checked with the mother at pick-up time who confirmed what the teacher suspected—that Mahatma was his given name and the name he had been called his entire life.

This inspired Ms. McNeil to design a class project on identity that would fit nicely as a segue to the Ancestors Unit called for by the Social Studies standards—a way to speak to the issues in her students’ lives and connect them to the curriculum. The identity project would focus on names—the various names each of us are called by the people in our lives, how and why we were given those names, our feelings about our names, and include a discussion of bicultural identities. She would anchor it in a literature study, with small collaborative groups each being given one of five books. For students still developing English reading skills, audio-books were made available, and she intentionally partners more fluent readers as buddies with students who need more peer modeling and support. The books selected were: The Name Jar, Chrysanthemum, Your Name is a Song, My Name is Sangoel, and My Name is Maria Isabel. Guiding questions included: Where did the character’s name come from, and why? How did the people who named the character feel about that given name? What experiences and influences made the character feel uncomfortable about their name? How did the character resolve the conflict about their name? What do you think you might have done in their situation?

Ms. McNeil witnessed her students really paying attention to each other’s stories, learning about each other’s identities, and grappling together with what it means for them to be living in and across multiple cultural worlds.

Listening in on the discussions of the collaborative groups, Ms. McNeil heard students speak repeatedly about their own experiences enduring mispronunciations or being teased about their names. She made a mental note to bring up the issue at a faculty meeting for possible school-wide efforts to honor and respect children’s names. She was also motivated by those conversations to assign a Home School Connection project for students to research their own name, to find out why that name was chosen for them, and then to reflect on their own personal choices for their name with a message to the class on “what I wish you would call me.” Students were given the choice of making an oral presentation, drawings, collages, or written reports. The products of the “My Name” assignments were a highlight of the school year for Ms. McNeil as she witnessed her students really paying attention to each other’s stories, learning about each other’s identities, and grappling together with what it means for them to be living in and across multiple cultural worlds. Mo had prepared an oral presentation, delivered as he held up a picture of his grandfather. “My name is Mahatma, given to me with love and great hope by my parents in honor of the great leader Mahatma Gandhi, and my own grandfather. You can also call me Mahatma if you want, but I want to be called Mo.”