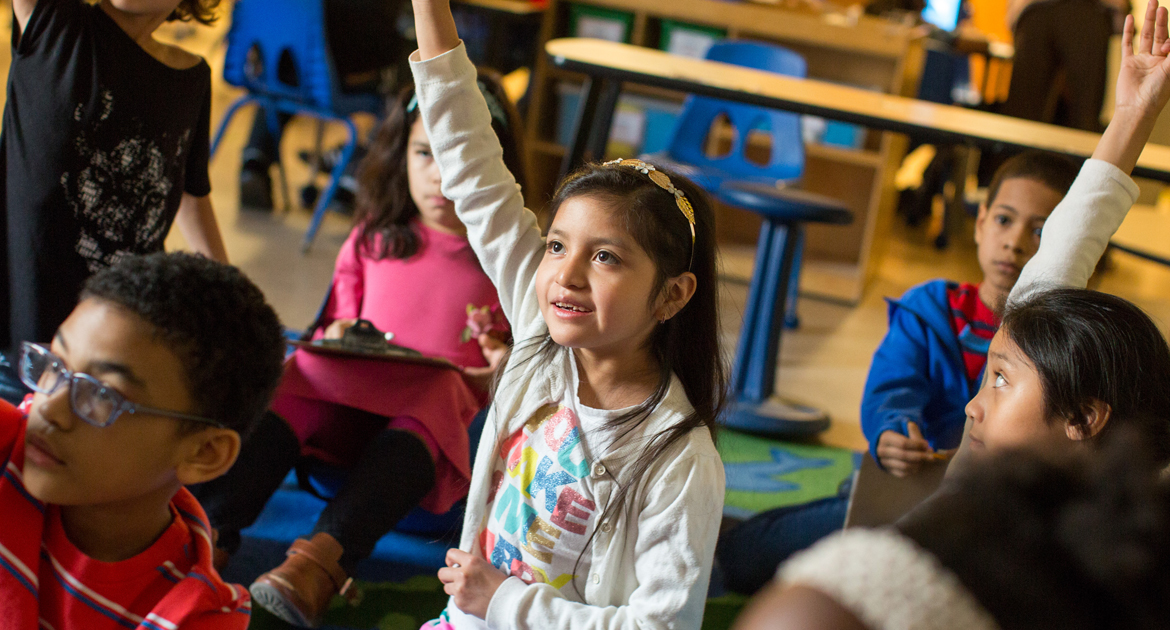 Third Grade: English-instructed class with seven Multilingual Learners who have a variety of home language and cultural backgrounds.

Setting:
Mr. Turner has been working since school began to build his third-grade students’ skills of working together and engaging in productive and respectful collaborative conversations. He knows that this requires intentionality, work to develop specific skills of dialogue, and structuring lots of opportunities for small group collaboration. The class has been adding regularly to a T-Graph chart on the wall labeled “Collaborative Conversations,” with one column listing what a collaborative conversation LOOKS LIKE (e.g., eye contact, listening to each other, taking turns, etc.), and the other what it SOUNDS LIKE (e.g., “I agree with you…”, “Good point, and I would add…”, “I don’t understand, can you explain?”, “What do you think?”, “Why don’t you report for our group, we’ll help you if you need it”, “My idea is _____”). The SOUNDS LIKE column is particularly important for the Multilingual Learners in the class, who are helped by the explicit modeling of English words and sentence starters to enter into conversation and share their ideas. All of Mr. Turner’s third-graders practice using the language for presenting ideas: “I think ____”, “My idea is ____”, “I conclude _____”, etc. and as they are now several weeks into an Animal Adaptations thematic unit, he feels they are ready to put that language to use in a structured collaborative activity.

Lesson: Supporting Multilingual Learners’ Participation in Collaborative Dialogue
Today, Mr. Turner has divided his class into small groups of five students each, and given each group a packet of photographs of animals in their natural habitat. The task is for each group to decide together which photo is the best illustration of animal adaptation; to agree on some key points about why they think so; and, to prepare for someone to present their ideas to the whole class.

Mr. Turner knows that this requires intentionality, work to develop specific skills of dialogue, and structuring lots of opportunities for small group collaboration.

As the groups get busy, Mr. Turner circulates, listening to the groups, reflecting on the quality of their process: Are they listening to each other? Are they on topic? Is everyone participating? Are they respectful? Are they building on each other’s ideas? Are they inviting and supporting each other’s participation? As Mr. Turner circulates, he comments on the productive speaking and listening skills among the groups. He turns to Jerry and says, “Wow! I just heard you use the word ‘camouflage’ in a complete sentence! Great way to use our academic vocabulary!” The teacher cheers on one group, “I love the way you are asking each other if they have other ideas to add. Great collaborative discussion!” He notes the class is doing a good job today, and he is particularly glad to see that his Multilingual Learners are active participants and that the Designated English Language Development (ELD) work on how to share ideas has paid off for them. He makes a mental note to spend some time over the next few days on the skills of building on others’ ideas. He already has in mind some further sentence stems that he can add to their ongoing list—prompts like, “I agree with ___ because…” and “___’s idea makes me think…”

After 15 minutes, Mr. Turner calls time and pulls out his “Numbered Heads Equity Sticks.” Students within each small group number off 1, 2, 3, 4, and 5, and wait to see which number is called. Pulling a stick randomly, Mr. Turner calls out, “Group A, number 3! Which photo did you choose and why?”

Number 3 turns out to be Marisol, a Multilingual Learner who tends to be pretty quiet in class and speaks hesitantly when asked to speak. When Marisol looks slightly panicked, the teacher gets the eyes of the class off of her by prompting everyone to turn-and-talk, thus giving Marisol a chance to gather her thoughts. Mr. Turner smiles reassuringly at her and reminds her she can check in with her group to refresh the points they had come up with. Marisol turns to her group, who lean forward to encourage her, and who whisper a few ideas to her. They had already discussed their choice of the deer in a forest as the photo, so Marisol only needed to hear the words one more time in order to put together what she was going to say. Mr. Turner brings the class back and asks Marisol again, “As the representative of Group A, which animal and photograph did you choose, and why?” With her group cheering her on, Marisol holds up the photo of the speckled deer in a forest of trees, and glancing over at the sentence frames on the wall under “Group Reporting” (“We selected _____ because”, “We chose _____ for these reasons ____”) starts to speak: “We selected the deer with brown and white spots because it is ‘camouflage’ in the trees, so predators can’t see it very well.” Sammy, a member of Group A, calls out, “Way to use the vocab, Marisol!” This further encourages Marisol, who continues with more details.