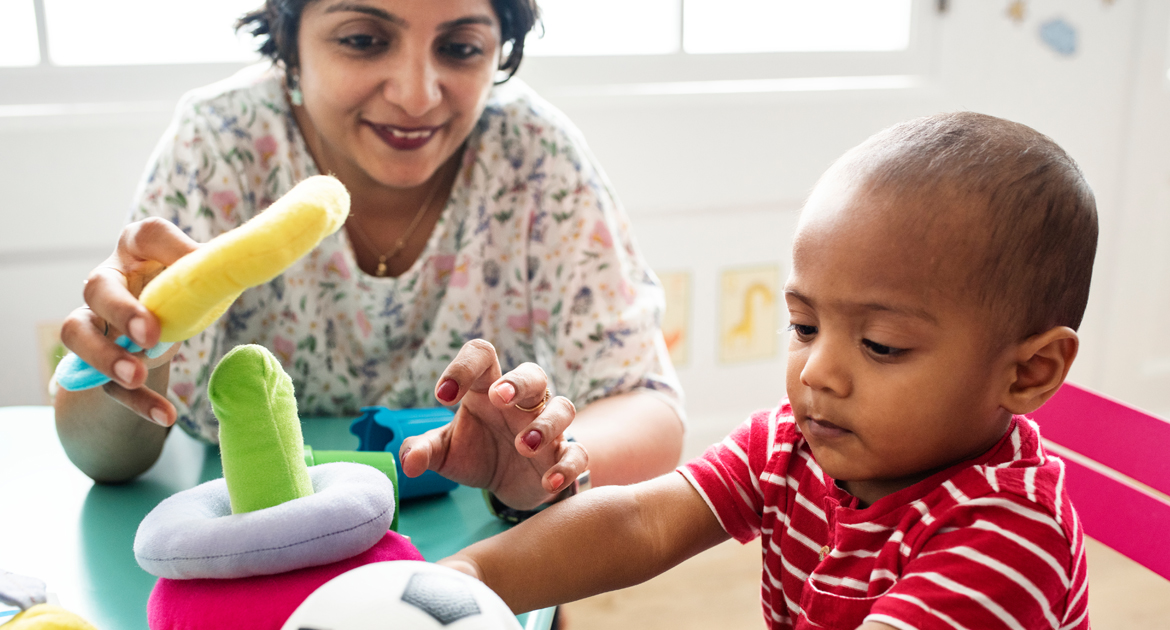 Setting:
Carlos Espinoza, a three-year-old boy, has just enrolled in a PreK program in Daly City, California. His family had a small farm in Michoacán, Mexico, but due to safety and financial concerns, the family emigrated to the U.S. and enrolled Carlos in a 50-50 dual language (Spanish/English) school-based preschool program. The classroom has eighteen children: twelve mostly Spanish speaking and six who speak mostly English. The teacher, Maria, alternates each day between instruction in English and instruction in Spanish.

Teacher Maria spoke to Carlos’s family to learn about their language goals for him. Both parents, Esperanza and Gustavo, speak very little English but are eager for Carlos to learn English so he can succeed in the U.S. They have even tried speaking English at home so Carlos will learn it more quickly. After her initial interview with Carlos’s parents, Teacher Maria encouraged them to continue to use their native language at home. Since they are fluent in Spanish, they can provide Carlos with a rich and varied language environment at home, which is actually really helpful in preparing him to learn the features of a second language.

Teacher Maria decided that she should assess Carlos’s language skills in English and Spanish so that she can develop appropriate language goals in each language.

Teacher Behavior:
Teacher Maria considered how to use both formal assessment tools and informal assessments to assess Carlos’s language development in English and Spanish. Teacher Maria observed Carlos’s language interactions with other children during classroom activities and outdoor play, using the Desired Results Developmental Profile (DRDP), which is aligned to the state Preschool Learning Foundations. She noticed that he was quite outgoing and used some Spanish words during informal interactions with his Spanish-speaking peers, but seemed reluctant to engage in teacher-led activities and rarely responded to children or adults in English. Teacher Maria rated Carlos as “discovering English” on the DRDP English Language Development scale. Since Carlos’s early language exposure was in Spanish, this is to be expected. Teacher Maria decided that she should assess Carlos’s language skills in English and Spanish so that she can develop appropriate language goals in each language. In addition, she will identify any family-specific patterns of language usage that may help her better understand Carlos’s behavior in the classroom.

Teacher Maria has chosen to administer a simple standardized language assessment, the Pre-IPT, which can be used to assess and track oral language proficiency in English and Spanish. The Pre-IPT assesses four aspects of oral language development: vocabulary, grammar, comprehension, and verbal expression. It also uses a storyboard with a set of story pieces and prompts the child can use to talk about his own life experiences. It takes about 7-10 minutes to administer in each language.

The results confirm Maria’s initial observations: Carlos is non-fluent in English and although he scored a little higher in Spanish, he is still considered non-fluent. His Spanish language abilities, although slightly below his peers, do not concern Teacher Maria as this is Carlos’s first organized preschool experience. Therefore, she will not refer Carlos for a more in-depth language evaluation but will closely monitor his progress in both languages over the next several months. She will also meet with Carlos’s parents again to share some picture books and ideas for activities that will increase his opportunities for extended language interactions in Spanish at home.